At the time of writing, the Proposal is being reviewed by the Council of the European Union to possibly propose amendments, after which the Proposal will undergo the same reading by the European Parliament. It is too early to predict which changes will end up being adopted in the final version of the Amending Directive, which is expected to be published only after a trilogue.

While the Proposal is being considered, NJORD's Banking and Finance Team has chosen to summarise the final Proposal for the Amending Directive, as proposed by the Commission.

REVISION OF THE AIFM DIRECTIVE – BACKGROUND

OVERVIEW OF THE CHANGES 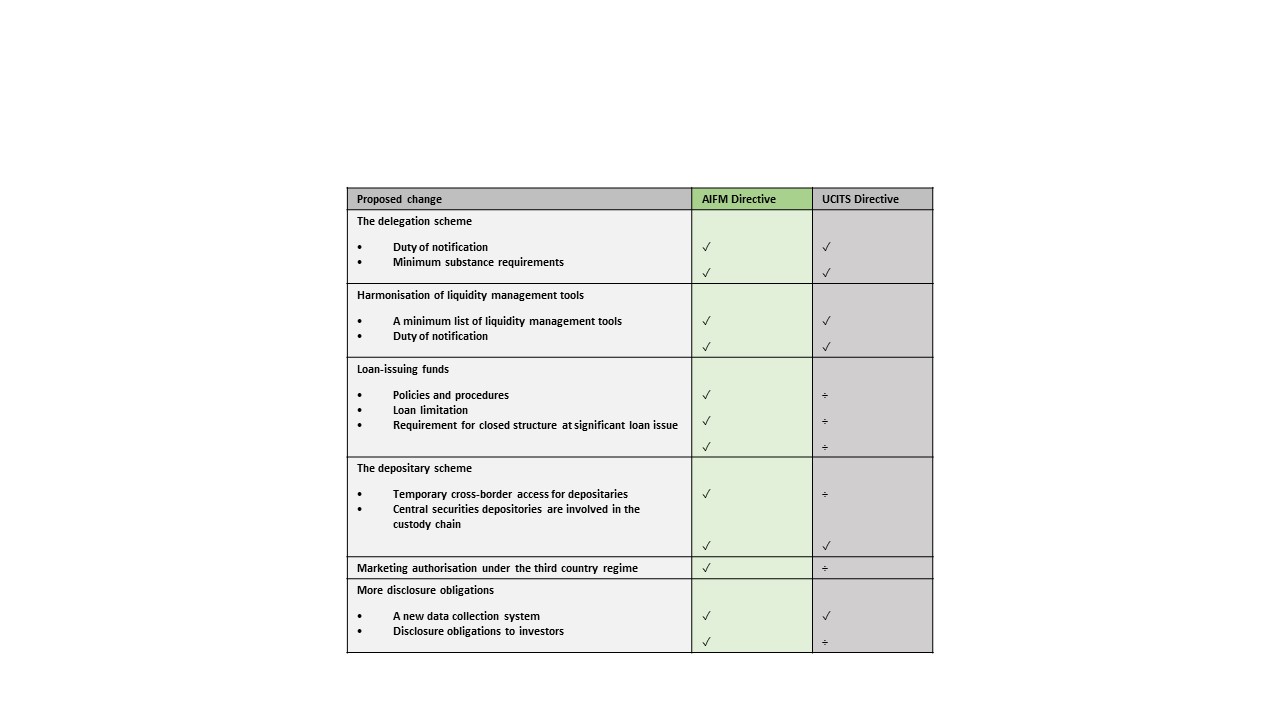 NOT COVERED BY THE PROPOSAL

Several expected changes were unfortunately not included in the Proposal, such as:

The delegation scheme under the current rules for AIFM and UCITS implies that essential tasks can be delegated to third parties, including portfolio management and risk management. In practice, this access is important in cases where third parties have specific expertise in a particular geographic market or asset class.

First, the Amending Directive requires national competent authorities in the EU to notify ESMA when a fund manager[1] in the EU delegates more portfolio or risk management functions to a third party outside the EU than the fund manager itself performs. In this context, ESMA shall be empowered to develop level 2 standards for communication. It should be noted that there is no requirement for the EU fund manager to retain a minimum of its activities in the EU.

The European Commission says the amendment aims to do away with differences in national supervisory practices that reduce legal certainty, increase disparities in supervisory outcomes and ultimately do not ensure consistent investor protection across the EU. The notification obligation from national competent authorities to ESMA can be expected to lead on an equal footing to increased reporting obligations for fund members to national competent authorities.

Also, it is proposed that the fund manager should hire or commit to employing at least two natural persons residing in the EU employed on a full-time basis.

The above amendments aim to further ensure that fund managers use the necessary human resources to carry out the tasks they carry out themselves. It also seeks to harmonise the regulatory framework for AIFM and UCITS in this area.

[1] A fund manager means an AIFM or an investment management company.

HARMONISATION OF RULES FOR THE USE OF LIQUIDITY MANAGEMENT TOOLS

Liquidity management is a key part of the Amending Directive. In addition to the proposed changes to the rules for lending funds (see below), the European Commission will introduce a harmonised minimum set of liquidity management tools in the AIFM Directive and the UCITS Directive. Read more below.

At the same time, the Proposal introduces a requirement for managers of open-ended AIFs and IFMs to select at least one appropriate liquidity management tool from the defined list and adopt its application in the provisions of the fund manager or fund, including, for example, instruments of incorporation. In this context, detailed policies and procedures for the activation and deactivation of the selected liquidity management tool shall be developed.

As mentioned above, liquidity management is at the heart of the Amending Directive, which, as something new, contains several liquidity requirements for AIFs issuing loans (lending AIFs). Read about the most significant changes below.

First, the European Commission proposes a requirement for managers of lending AIFs to establish effective policies and procedures for the issuing AIF, including regarding the assignment of credit, the credit risk assessment, and the management and monitoring of the fund's credit portfolio. The obligation also entails those policies and procedures must be reviewed annually.

Secondly, the European Commission proposes a loan limitation aimed at limiting the AIF's exposure rate and ensuring risk diversification. The loan limitation implies that managers of lending AIFs must ensure that no loans are issued to the same obligor for more than 20% of the AIF's capital if the borrower is a financial undertaking, an AIF or a UCITS. Note that the loan limitation does not apply to borrowers other than those mentioned.

Third, the European Commission proposes a requirement that AIFs that issue loans for more than 60% of their intrinsic value[1] must have a closed structure.

The European Commission states that there is room for efficiency gains in the market for depositary services. This is especially true in smaller markets where there are fewer depositary service providers, leading to less competition, increased costs and, eventually, less efficient fund structures.

As a temporary measure, the European Commission proposes that EU regulators be equipped with the power to authorise the purchase of depositary services in the other Member States where necessary. This is also expected to lead to savings for both depositaries and users of depositary services, including smaller AIFMs. The measure is expected to apply until further studies have been carried out on the possibility of introducing an EU depositary passport.

2. Central securities depositories shall be involved in the custody chain

The European Commission mentions a particular issue that implies that depositaries in certain cases have had limited or even no access to an AIF's assets when the assets are held in central securities depositories. To address this issue, the European Commission proposes to introduce a requirement that CSDs be considered to be one of the depositary's delegates when it holds an AIF's assets. Rather, this means that CSDs legally become part of the custody chain[1] and are responsible for doing so on an equal footing with depositaries.

Foreign AIFs may be marketed to professional investors in the EU in accordance with Articles 36 and 42 of the AIFM Directive if the detailed conditions for doing so are met. The EU Commission's Amending Directive entails minor adjustments in connection with marketing authorisations granted to foreign AIFs under this third-country regime.

Under the third-country regime mentioned above, to market foreign AIFs, the foreign AIF is not established in one of the countries that are on the FATF's (Financial Action Task Force) list of non-cooperative countries. The European Commission proposes to amend the AIFM Directive to refer instead to the EU's lists of non-cooperating countries.

Rather, this means introducing a requirement that the foreign AIF must be established in a country:

The European Commission states that the market data submitted to regulators is flawed or not sufficiently detailed, making it difficult for authorities to detect the accumulation of risks. Therefore, another essential objective of the Amending Directive is to improve the relevant data collection.

The European Commission proposes to develop a new data collection system to provide accurate, comparable, and timely data to the national and European supervisory authorities. This is expected to lower reporting costs and improve market surveillance. To that end, ESMA shall be empowered to develop level 2 standards specifying the details to be reported.

In line with the requirements of MiFID, the European Commission's Amending Directive introduces a requirement that managers of AIFs, on a quarterly basis, disclose to investors all fees, costs, and expenses that have been directly or indirectly charged to the AIFM in connection with the operation of its AIFs.

Our banking and finance team will follow the Proposal closely and keep you updated via our usual news updates. If you want to know more, please feel free to contact us.

ESMA: Retningslinjer for fit and proper-vurderingen